My 4 years in England remain precious and never to be forgotten.
There is so much to say about my 2 years attending Durrants Secondary Modern School in Croxley Green. My first year was 1955-56. First week I was continuously reminded I was an American. To my knowledge, the only American to be schooled at Durrants. So, I got used to being called "Yank" from all directions. Some of my fellow male students seemed to dislike me because of my origin but that quickly changed. Meeting to toss coppers against the wall, closest winning the money, was my newest English event. And, I was a pretty fare football centre forward, 4 X 100 school relay team runner and not bad at cricket with my American baseball background. My favourite competitive sports were soccer and running athletics.

Also, sang in school choir. First year finished 2nd in my class. 1956-57, finished 10th in class.  English history & Mathematics were my favourite classes.
I learned subjects earlier because American schools graduated pupils at 18 years of age. That was great. Especially, English History which I inhaled. Only problem, when returning to USA, I knew very little about American History. Was worth the lack of American History because it was replaced by extremely colourful English History. I remember Mr. Coombs. He was my French teacher and my football coach. Also, when class breaks and lunch breaks came, the girls were on one side of the playground, boys on the other. Was hard to interact. Although, normally at lunch, football was the boys activity. We played with a small rubber ball or a rock. I remember one field to St. Albans but can not remember why our group when. Was the first time I had a boiled eggs that wasn't hard as are American boiled eggs. Also, trips to museums in London and to see Richard III movie. My wood shop class was great. My mathematics classes, over 2 years, were the best. Unfortunately, my folks took me out of Durrants the last year in England. It was devastating going to an American school with my totally English accent and knowing nothing about American History. But, the experience of an English education has never been forgotten. My reason for this passage is to remind folks who were at Durrants those same two years, they will never be forgotten. My favourite time of the day was tea -time.
My father was stationed at Bovingdon RAF from 1955-58
Randall (Randy) Wessman. 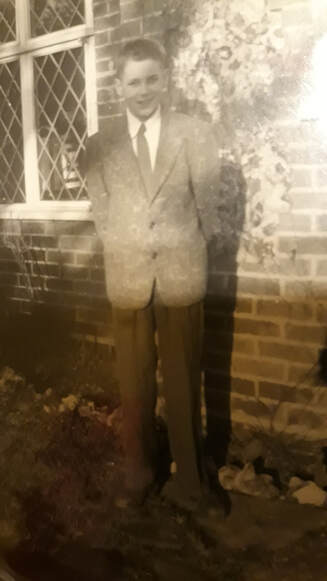