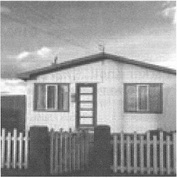 Prefab house in Croxley Green
PREFAB MEMORIES OF A CROXLEY RESIDENT 1946  - From The Croxley Green Resident issue 195
My two daughters and I were the third family to occupy a brand new Prefab - No 6 Cherry Lane. Each of the small lanes had the name of a tree or shrub. As No 6 was the last of three in a row, we had good sized gardens, back front and side. Durrant's School was next door and we could watch the children being taught by Mr Fone (history teacher) to grow vegetables, it was the girls' entrance by our Prefab. The Prefabs were very comfortable, in the kitchen everything was built in, for example a wash boiler, oven, fridge and metal cupboards with drawers. The living room had the same metal dresser and drawers and a fireplace with a small stove with a door. There were 2 bedrooms off the hallway, a separate toilet and bathroom with a metal airing cupboard.

During the Winter, it was very very cold to go to bed and I always baked 2 bricks in the oven and wrapped them in woollen cloths and they became the water bottles'. From time to time I had to climb on the flat roof to sweep the chimney! In the garden we had two sheds, one concrete and one made of corrugated iron and a water butt outside the back bedroom window, we used that water to rinse our hair in. As the Prefabs were a brand new venture in Croxley Green, most of the people living there were young families, hence the children grew up together and it had a lovely community feeling with everyone knowing each other. The Prefabs on the left hand side of the crescent had Fosters Farm animals next door with cows, free range chickens and cockerels, noisy early morning calls! At the top of the crescent, the Prefabs overlooked Durrant's field which was used for all the sports. There was a huge roller to flatten uneven bits and it was great fun for the children to climb up onto it and slide down again.

Every Friday evening, the fish and chips van came round and Churchman's mobile greengrocers. I also remember the rag & bone man and the knife grinders. We lived there from 1946 - 1967 when we moved into a newly built maisonette, by then they had started to demolish the Prefabs, centre ones first then the outside ones. We had lots of happy, safe times there like Bonfire night and the children making camps and dens in the fields opposite, where the shops are now in Baldwins Lane, even the seasons knew their place in those days.
Unknown