​Neville Rhodes Armitage was born in Tilford, near Farnham, Surrey on 11th May 1902 to Edward and Amy Armitage. The 1911 census records that Neville’s family were living at The Green Hills, a large country house with seventeen rooms and six servants. Both parents were born in the West Country, Edward in Weston Super Mare and Amy in Exmouth Devon.
In September 1926 Neville married Gladys Lilian Abraham in the Parish church of Finchley. The church banns in the marriage register document that Gladys is the daughter of John William Abraham and his profession is an Architect whilst Neville’s father’s profession is a ‘Gentleman’.
It was soon after their marriage that Neville and Gladys moved to The Wheel House, Loudwater Lane, on the boundary of the Croxley Green parish.  Neville and Gladys’s children included Gillian R Armitage (born 1928) and Deirdre R Armitage (born 1932).

Around this time Neville had been learning to fly the early two-seater biplanes. On the 16th February 1930 he was awarded his Certificate at the National Flying Services, Hanworth to fly the D.H. Moth, Cirrus 85/95 hp. 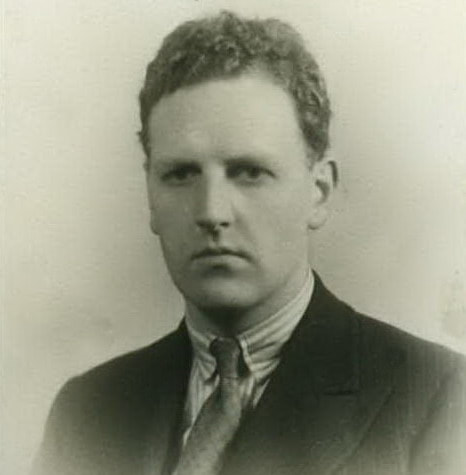 Neville Rhodes Armitage 1930
​During WW1 Hanworth Park, near Feltham, was used as an airfield by the Whitehead Aviation Construction Co Ltd.  The company produced the early Sopworth aircraft, a valuable defence against Germany’s advanced aircraft. However, after the war, although their efforts in broadening the scope of manufacturing with various new aircraft designs, the company failed and 2,000 employees lost their jobs. For many years parts of the site were let to several other companies.
In November 1928, the National Flying Services Ltd. (N.F.S.) was formed, to co-ordinate a national network of flying clubs and aerodromes. In January 1929, Hanworth Park was developed as a functional aerodrome and renamed London Air Park, with the original Hanworth Park House as a country club and the headquarters of N.F.S. Hangars were erected in four separate areas of the Park. On 31st August 1929, Hanworth aerodrome was re-opened for the first training aircraft to be used and included were the D H. 60X Moths and D H. 60M Moths. The aerodrome gained notoriety for garden party ‘fly-ins’, air pageants and air races and attracted many celebrities including Stanley Baldwin (M.P. and P.M.), Louis Bleriot, Barbara Cartland, and Amy Johnson.

The de Havilland Aircraft Company Ltd, a British aviation manufacturer established in the late 1920 by Geoffrey de Havilland at Stag Lane Aerodrome on the outskirts of North London, was later moved to Hatfield. The company was responsible for a number of important aircraft, including the Moth biplane and the Comet, that revolutionised general aviation in the 1920s and the 1930s. The de Havilland DH60 Moth flown by Neville was an immediate success, and was effectively the world’s first affordable, practical and safe light aeroplane and it benefited hugely from its selection to equip a number of officially supported Flying Clubs during the 1920s and 1930s. It was also practical as a two-person training aircraft, as an early military aircraft, or available for private use.
Living in Croxley Green, Neville Armitage was within relatively easy reach of either aerodrome.  He may well have been in a financial position to own his own aircraft.
After the outbreak of WW2 on the 3rd September 1939, when Neville Chamberlain announced  that Britain was once more at war with Germany, Neville Armitage’s service records show that he signed up on the 7th September as a Probationary Sub Lieutenant with the Royal Naval Volunteer Reserve (R.N.V.R.). He was assigned to H.M.S. Drake IV. at Devonport, Plymouth, Devon. Another  record shows us that he was already attached to the London Division of the  R.N.V.R. from 7th April 1937. Neville held one of the following:  Board of Trade Yachtmaster’s (Coastal), Yachtmaster’s Second Mate or higher, Certificate.
Devonport was one of several naval bases operating in WW2 and was renamed from HMS Vivid to HMS Drake in 1934. Seamen waiting to board a ship or in service at the base, would have been allocated to one of the four naval base barracks:  Drake I, II, III. IV.  and their records would show one of these whether at sea or in transit to another ship.
From September 1940 to May 1941 for eight months the German Luftwaffe stepped up its attack on many of Britain’s major cities including Plymouth. In July 1940 the Royal Dockyards at Devonport had been targeted and although there were many civilian casualties the dockyard continued to operate. However, the following March and April 1941 the bombing by the Luftwaffe reduced much of the city to rubble.
The City of Plymouth recorded the names of those who were casualties in these raids.  Very sadly, the names of Neville and Gladys appear in those lists for 20th March 1940.  It would appear that Gladys was visiting her husband around this time. She is named as a casualty, aged 38 years, of The Wheelhouse, Rickmansworth, Hertfordshire, daughter of Colonel and Mrs J. W. Abraham of Holmewood, Hendon Avenue, Finchley, Middlesex, wife of Neville Rhodes Armitage R.N.V.R. Gladys was staying at 17 Leigham Street. It is not clear whether Neville was with Gladys at the time or at the barracks but his service records show that he was a casualty on the same date. The Plymouth War Memorial records his name on Panel 61, Column 2. 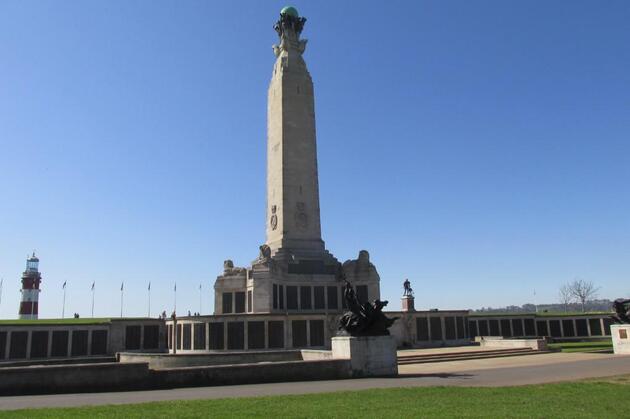 Plymouth Memorial. The Lighthouse and Sir Francis Drake statue on The Hoe
We currently do not have any further information regarding Neville and Gladys, their family and children. If you can help and provide us with any extra details, please use the Contact Page.
​