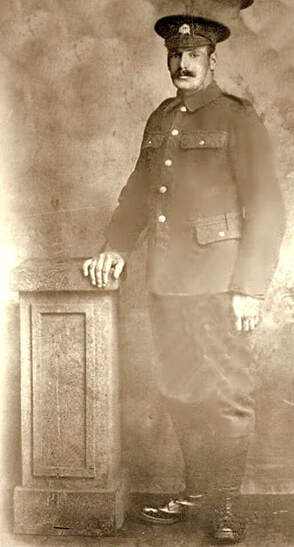 (© loaned by family members) Private Joseph Goodman
Joseph Goodman was born at Eastbury Cottages Watford, on the 2 April 1887.  He was the son of George and Sarah Goodman (nee Jeffs), Joseph was the second eldest of six children. On leaving school aged thirteen years old, Joseph was employed as a groom working with horses.

Following his marriage to Jane Elizabeth (nee Trowles) on the 12 April 1909 in Watford, the couple lived with Joseph’s parents at 122, New Road Croxley Green. They had five children in total, unfortunately their eldest son Joseph did not survive for very long, but Jane did produce another boy who was also given the name of Joseph after his father. He was called Joseph William but reversed his names as a young boy. The surviving children were Ethel Sophia (b.15th January 1910), Joseph William (b. 21st April 1913), Lillian Gertrude (b. 10th May 1914) and Dorothy Alice (b.16th July 1915).

Joseph, his wife and young family moved from Croxley Green about 1914 temporarily, to Jane’s parent’s home at 12 Vale Road, Bushey. They eventually lived in Bourne End, near Hemel Hempstead. The following year on 2nd June 1915, Joseph enlisted in Watford and joined the 4th Battalion Bedfordshire Regiment. His army service number was 20846.

​Over the course of the next two years Joseph was transferred several times within the army. On 14th December 1916 he was transferred to the 13th Battalion Loyal North Lancashire Regiment. His army service number changed to 35070. Whilst in France and Belgium he was also fighting with the 1st and 9th Battalion. They were part of the 74th Brigade, 25th Division.
The 74th Brigade had seen action in the  3rd battle at Ypres, firstly at Pilkem, but they were now  tasked to renew the attack on Westhoek. The Brigade were successful, but sustained very heavy casualties in the process, one of which was Private Joseph Goodman killed in action on the 11th August 1917 age 33 years. His body was never recovered and he was awarded the British and Victory medals.

This battle, better known as ‘Passchendaele’, was launched on 31st  July in torrential rain on the Western front and continued until November 1917. The aim was to gain control of the ridges south and east of the Belgian city of Ypres in West Flanders. With the non stop heavy rainfall, the tanks and men on foot were met with severe muddy conditions churning up the landscape. Consequently any significant ground became difficult to gain on the battlefield.

To compound the horror, this battle saw the first use of mustard gas. The German defence was based on machine-guns, sited at strong points and concrete pill-boxes. The offensive went on for three dreadful months with an estimated 487,000 casualties.

Bourne End where Joseph lived before his departure, has a small memorial garden on the roadside of the A4251 London Road and Joseph’s name is recorded on one of two panels that name fourteen men from the village who did not return. 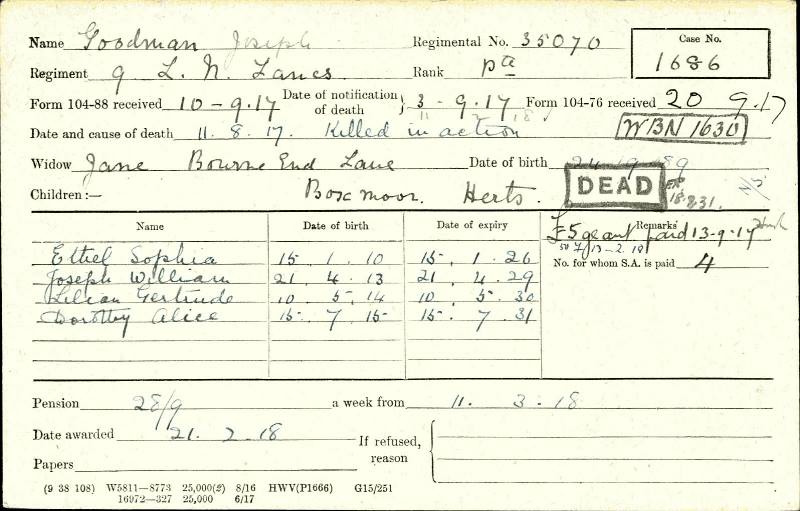 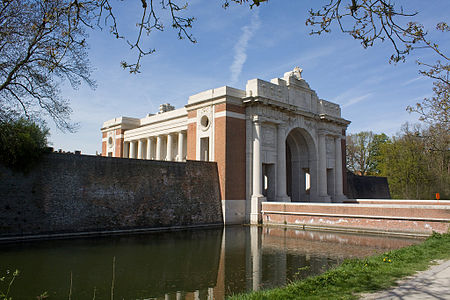 Menin Gate Memorial to the Missing
Following the Menin Gate Memorial opening in 1927, the citizens of Ypres wanted to express their gratitude towards those who had given their lives for Belgium's freedom. Every evening at 8pm, buglers from the Last Post Association close the road which passes under the memorial and sound the "Last Post
Joseph is also recorded on other WW1 related memorials including the Loyal North Lancashire Regiment website.
Private 35070, 9th Battalion, Loyal North Lancashire Regiment. Killed in action 11th August 1917 in France & Flanders. Age 33. Enlisted Watford, resident Bushey. Son of George and Sarah Goodman; husband of Mrs. John Nash (formerly Goodman), of Bourne End Lane, Boxmoor, Herts. Formerly 20846, Bedfordshire Regiment. No known grave. Commemorated on YPRES (MENIN GATE) MEMORIAL, Ieper, West-Vlaanderen, Belgium. Panel 41 and 43.
​