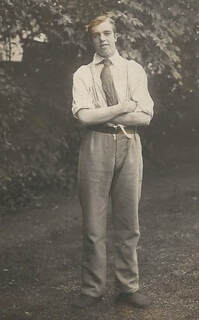 (© loaned by the Hull family) James before he joined up
Family History
The Hull family  have been residents in Croxley Green for many years. James’ great grandfather William, born c1782, was a Master Carpenter.  He died in 1853, and according to the Census of 1861 at some point after that date his two sons, William Henry and Humphrey, were apprenticed as wood carvers.  At that date they were living as lodgers with George and Rosina Westington and their family  at 12 Globe Road, Bethnal Green ,Middlesex. George’s occupation was listed as a wood carver.  At that period, Bethnal Green was an important centre for cabinet making.

​Whilst living in Bethnal Green William Henry, James’ grandfather, married  Lydia Mary in October 1863. The youngest  of their four children, Henry Edwin, James Edwin’s father, was born in 1869.  Sadly William Henry died in 1871. Lydia Mary remarried in 1875 and with her second husband, a cousin James Winter, the family moved to  Watford.

Henry Edwin met Jane Atkins his future wife and they were married at All Saints church Croxley Green by Rev. Astley Roberts on the 7th October 1888 and, as shown in the 1901 census, in that year their home was on Scots Hill.  Their children included  William aged 10 , Elizabeth aged 9, Lydia aged 6, James Edwin aged 3 and  Arthur aged 1. Jane’s mother was also mentioned on the day the census was recorded as part of the household.

By the time of the 1911 Census the growing family, which now included another son, Thomas, had moved to 36 New Road.   As a schoolboy James Edwin would have attended Yorke Road Infants school and then moved on to become a pupil at the boys’ school in the Watford Road.

Soon after the war began in July 1914, according to his WW1 documents, James Edwin enlisted in the 15th London Regiment on the 8th August  at Somerset House. His Regimental number was 540478. The same month the unit was mobilised to Bedmond near Hemel Hempstead, most likely for initial training, and then in November to billets at Watford.
​By 18th March 1915 the regiment had landed at Le Havre, France. James’ regiment was re-designated as a Territorial Battalion of The King's Royal Rifle Corps.
The regiment is known to have been involved in the battle at Loos and James unfortunately was wounded during this time. (The British army had sustained a large number of casualties). Currently it is not  known where he was sent to convalesce. The family have kindly loaned the website photographs that were taken of James in the uniform worn by injured servicemen, showing him whilst he was recovering.  The Hospital Blues uniform was worn by patients who were more mobile. They were provided with a  single breasted jacket with a white lining and trousers made of a flannel type material of Oxford blue colour. The tie would have been red and the shirt white. Regimental caps were worn and medals were displayed on the left breast.
​James returned home on leave sometime in early 1918 and married Elizabeth Parsall between April-June that year. James returned to France after his marriage (date currently unknown) and he was awarded the Military Medal in August 1918:  ‘For your Gallantry and services rendered to your country.’
A fellow soldier, Dick Mansfield, who returned home in October 1918 , at James’ request  wrote to his mother Lydia to give her the welcome news that James was safe and well. With the letter was a German watch that James had obtained. (see transcript) 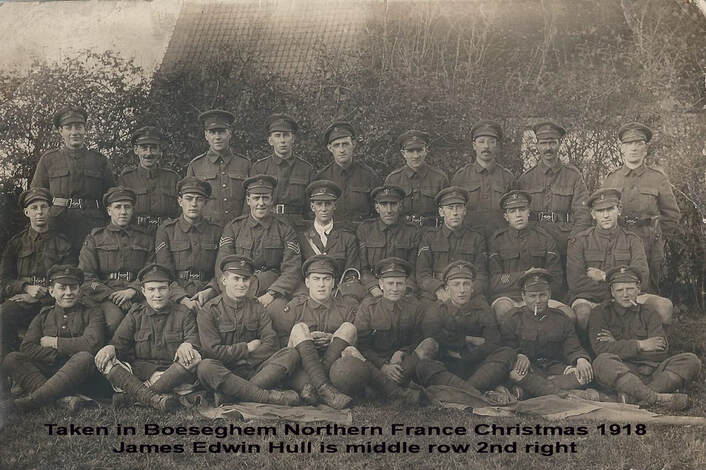 (© loaned by the Hull family) James Edwin Hull with his regiment in a photograph taken Christmas 1918
A photograph taken at Christmas 1918  confirms James was still with his regiment as a Lance Corporal. Many regiments did not officially return home until 1919 as there were delays in arranging transport facilities. James’ demobilisation was signed on the 16th February 1919.

When James was demobbed he returned to Croxley Green. He an Elizabeth had two children, Margaret and Dennis and moved to the newly built houses in Gonville Avenue in 1921.
​Every service person was provided with a personal record book and fortunately James’ did survive and became part of the family memorabilia.
​James also acquired a booklet that records his regiment’s activities as part of the  30th Division’s closing push to defeat the German army.
The booklet, Brief History of the 30th Division from July 1918 to the Armistice 11th November 1918 is a vivid account.  A map is  included that shows  the date of the advancement and details of each position.  James is mentioned A/242 2nd 15th London Brigade Book 11 page 25 as receiving his Military Medal Division, Brigade, Battalion Regiment, Company (troops). Extracts of this booklet have been reproduced.
As with many young men returning home to Croxley Green there was an opportunity for James to find employment at the John Dickinson paper mill. He joined the company’s  Fire Brigade. View HERE
When the company made  plans to remember the work force who had lost their lives  during the war a Remembrance Garden was created and a service took place in  1922. The  mill Fire Brigade was amongst the departments represented. 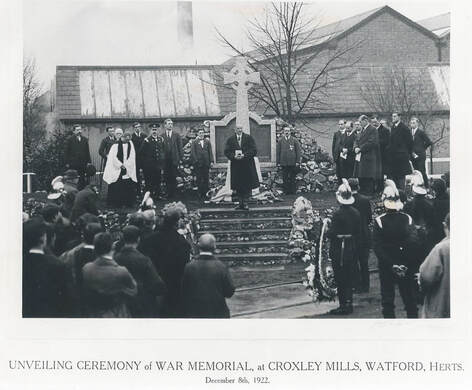 (© loaned by the Hull family) James Edwin Hull back row 4th left
As a manufacturer of a  highly flammable product  it was essential for the mill to have its own brigade. Unfortunately, in May 1924 a fire was discovered in the main offices at around 9pm. The mill’s own brigade was soon mobilised to save the building but the task was too much as there was a strong breeze that night fanning the flames. Such was the intensity, brigades arrived soon after 10pm from other John Dickinson’s  mills near Apsley. District fire crews from Bushey, Berkhamsted, Chesham, Hemel Hempstead, Kodak (Harrow), Rickmansworth, Watford and St. Albans also were summoned. In total at least 10 Brigades and 150 fire fighters tried in vain to save the buildings, even though water was freely available from the canal and the River Gade. The damage to the main offices and stationery department were completely gutted and the cost of the damage ran into thousands of pounds. James would have been part of this mammoth attempt to quell the flames. see Dickinson's

Safety was always uppermost with the mill managers and notices were constantly placed around the mill as a reminder to the staff of the vulnerability of the environment that they worked in.
​
In 1949 James received a long service medal as part of the mill Fire Brigade Force and the National Fire Brigades’ Association.
James passed away in 1957