​George was born in Croxley Green on 4th June 1899 to parents James and Susannah. James was born in Whipsnade, Bedfordshire and Susannah his mother in Knockholt, Kent. The 1901 census shows the family were living in one of the Rose Cottages in New Road. Ten years later the 1911 census shows James and Susannah have moved to Brightwell Road, Watford and they have a son George and three daughters Grace, Lily and Clara.
James’ occupation is recorded as working at a paper mill in the boiler room. A process where rags having been stripped of buttons etc, then boiled and added to other materials such as wood pulp, is the initial stages for paper production. This is most likely John Dickinson’s mill.

On leaving school it would appear George also began working at John Dickinson. 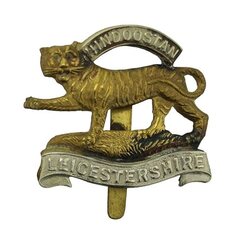 The Leicestershire Regimental cap badge.
​George enlisted in the army soon after his eighteenth birthday. A war record shows that George served first in a Leicester Regiment and then the 4th North Staffordshire Regiment. He was abroad from December 1917 until April 1919 and was discharged in December 1919.
The following year in 1920 George married Jeanetta Smith who lived with her parents in Queens Road Watford. Unfortunately, Jeanetta passed away in 1931, but the 1939 census shows George and Jeanetta had two children. George remarried in 1938 to his second wife Catherine Ransom. 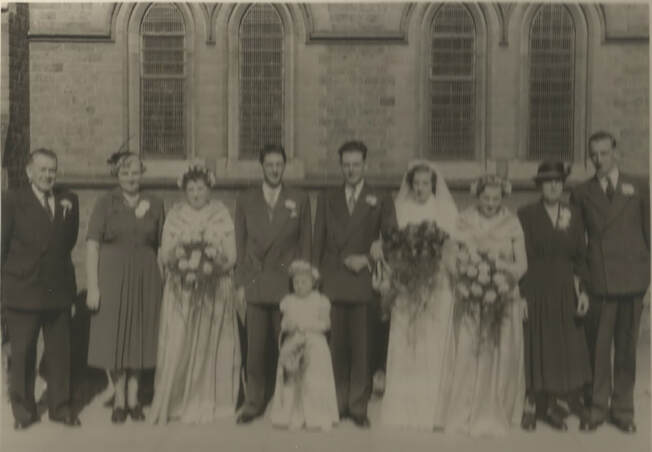 (© loaned by Robert Putman) The wedding of George's son Maurice to Hilda Parlett in 1952. George and Catherine are shown on the far left the bridegroom