Sapper Edgar John Toms
​
Sapper Edgar John Toms enlisted in June 1916, 2820, The Royal Fusiliers but was transferred to 5th Field Survey Company, Royal Engineers. He was the son of William and Lizzie Toms, 26 Yorke Road, Croxley Green. He died in a German hospital 3rd June 1918 and was buried in Annois Communal Cemetery, Aisne, France. Plot I. Row B Grave 6.

Edgar and his family corresponded regularly during his training as well as during his eventual posting abroad. He was able to give his parents an account of some of the activities he was involved with and received news from them about how the village he grew up in was coping.

Edgar spent much of his training at Portobello in Scotland. This was not far from the coast and south of Leith, quite different from his Hertfordshire village life. His training was centred in the 'Marine Gardens' at Portobello that were first opened to the public in 1909. This thirty acre site originally advertised as “one of the most notable outdoor attractions” and drew three quarters of a million visitors the first year. The  entertainment  included Bostock’s Circus and Zoo, the Marine Cinema and Theatre, a scenic railway and ornamental gardens

However, during the First World War, the park was closed and a great number of its buildings demolished and the site converted for use by the military as a temporary barracks. It was from here Edgar left in 1917 to journey to France with his comrades. During March 1918 Edgar's parent lost contact with him and at one point received news he was 'missing'.
Edgar had in fact been made a prisoner of war and taken to a German camp at Flavy-le-Martel not far from St. Quentin. The camp conditions were such that Edgar was taken ill with Dysentery and due to lack of care died in the camp hospital. His parents William and Lizzie chose for his gravestone to be inscribed with the words 'He ran the straight race' 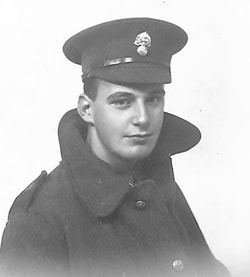 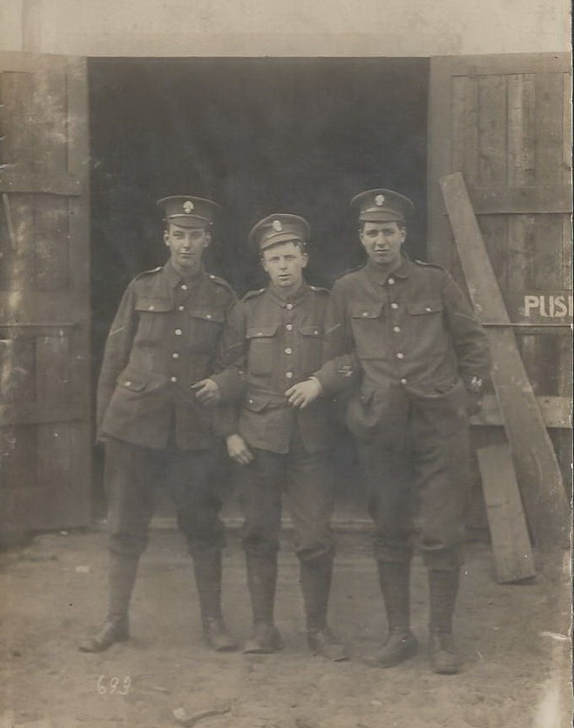 (© loaned by Liz Frow) Marine Gardens Portobello 3rd May 1917. Edgar (left) with two of his comrades prior to being posted to France.