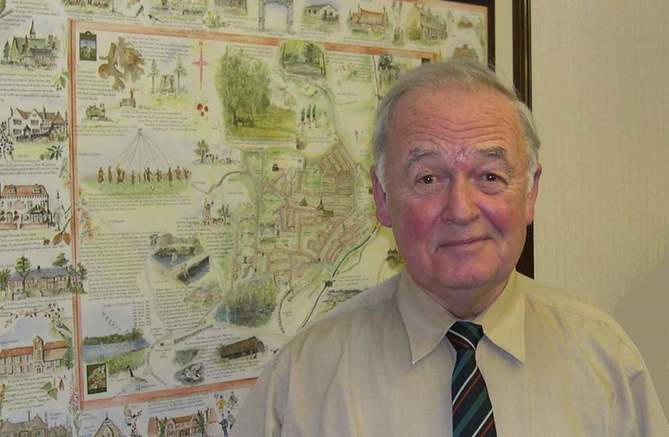 It’s Good to Talk - from the December 2013 All Saints Croxley Green Parish Magazine
Do you enjoy talking on the phone? I do. It is difficult to imagine that in this affluent country of ours where we try to care for the elderly in every way there is one thing we all choose to forget. This is the problem of massive loneliness of millions of people sitting in comfortable isolation with only the television and radio for a friend. This is essentially a modern problem that goes with our modern way of living. Quite recently the aged were part of our extended family and had companionship.
Not so very long ago there was a well known BT advertisement of phone call gifts with the slogan of “It’s Good to Talk” but since then the humble land line has given way to mobiles, Twitter and Face-book, especially among the under 30s.
I belong to an organisation called the Silver Line Service which rings up elderly (mostly retired) single people who they perceive to be lonely – the recently bereaved are especially happy to have a chat. The rules are that you regularly ring (once a week for example) a number of people not exceeding five. The average call should not exceed fifteen minutes. The format usually involves asking a few questions and allowing the person called to tell you all about things. It is vital to sound enthusiastic and interested and to ring up either mid morning or in the afternoon and never to leave a message on the answer phone which causes confusion.
I have five regular people who love their weekly chat. It is a simple Christian way to achieve outreach by land line and I suggest this for a New Year Resolution. Look around you among your friends and acquaintances; under their tranquil exterior there is often deep loneliness.
David Wynne-Jones

Croxley Green - A Great Place to Grow Up In - from a 2012 edition of the Parish Pump
As a Granddad in our beautiful village, I have plenty of chances to evaluate, when pram pushing, what is on offer for the younger generation. In many areas of our country, children can get bored very easily as there is nothing to do. Not so in Croxley Green where there are lots and lots of 'fun things' to do from an early age. For a start there is the Under One Club for babies which allows new mums (and dads) to take their little ones to a cheerful and welcoming group. Then there are numerous toddler and pre-school groups before going on to our excellent 'state of the art' schools. We have girl guides and boy scouts, and even a sea cadet group based on the canal, among many others. What joys are to be found fishing along the River Gade or exploring the mysteries of Croxley Hall Woods and the Common Moor? In the summer
there is so much green space to run about and play and picnic on. There are super play and recreation grounds, especially the 'new' one at Barton Way which must be top of the class when it comes to fun! Who wants to go to Alton Towers when we have our own mini one on our doorstep? For the thrill seekers we have a top notch skate park which is safe, adventurous and well managed; who could ask for anything more? Each year at the Revels I watch the children waving happily from the many floats which pass by in the procession - one can get an idea of all that is happening for young people in Croxley Green by looking at the variety of activities represented by the floats, stalls and entertainment at the Revels itself which is an afternoon of real community activity on the Green every June. As a Parish Councillor, I feel really proud that we have such a youth friendly environment. Croxley Green is surely one of the best places to grow up and this is celebrated at the end of the year with a wonderful, free firework display where thousands of us welcome the new year.
Parish Councillor David Wynne- Jones

Contact your Parish Council—Cllr D Wynne-Jones - from an edition of the Parish Pump 2005
One of the joys of living in Croxley for so many years is that one is easily recognised, especially if one is wearing an Australian bushwhackers hat. One learns as
one walks down the street or goes into any shop that at least someone will come rushing up to you and make suggestions about things that they feel need changing or
rearranging in our beautiful village area. It is amazing that a concerned citizen will spend half an hour talking about problems to you but will not consider writing a short
letter to our excellent Parish Clerk, or making a phone call so that we can, together as Councillors, consider your constructive suggestions and complaints by putting them on the agenda at our Council meetings. Remember you are also welcome to attend and speak for a few minutes at any Parish Council meeting, which is on the last Thursday of each month. Writing a letter before hand is most effective as it can be referred to, discussed and answered. The more information we get from the residents of Croxley the more effective we can be on your behalf. The address, telephone number and e-mail address for the Parish Office is on the front cover of this edition. Don’t hesitate to write it down in your address book, and we look forward to hearing from you.Croxley Green Parish Pump - Spring Summer 2005 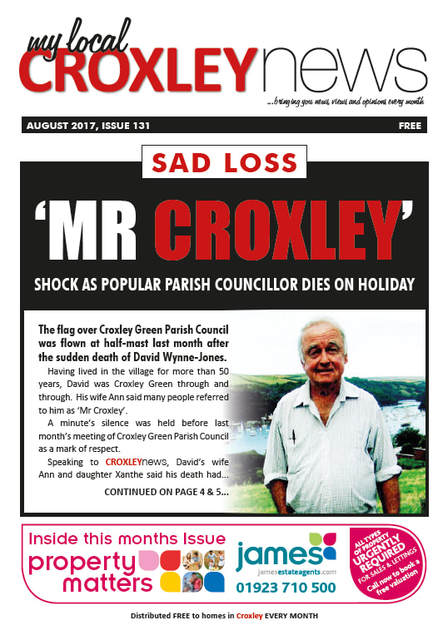 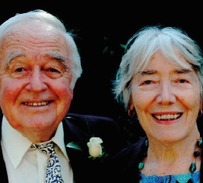 David with Wife Ann
The flag over Croxley Green Parish Council was flown at half-mast last month after the sudden death of David Wynne-Jones. Having lived in the village for more than 50 years, David was Croxley Green through and through. His wife Ann said many people referred to him as ‘Mr Croxley’. A minute’s silence was held before last month’s meeting of Croxley Green Parish Council as a mark of respect. Speaking to CROXLEYnews, David’s wife Ann and daughter Xanthe said his death had come as a terrible shock.
Ann said: “The doctors said he was on top form. We arrived on Saturday and he died on Sunday. We had a lovely last family evening. He was cracking jokes and his brother Patrick was there too.” Arriving in Croxley Green in 1963, David spent his working life in education and traveled around the world training teachers in countries including Kenya, Swaziland, Malyasia and Kirabati – but always returned to Croxley. Xanthe revealed that her father had residency in Australia – but couldn’t bring himself to leave the village.
Retirement for David proved to be nothing more than a word, as Ann revealed. She revealed: “They seemed to call him Mr Croxley Green. He was always interested in people and communities and I think that stemmed from his father who was in the Church of Ireland. After he retired, he worked for Christian Aid and the Pacific Island Society. He would always find something to do and where there was an opportunity, he would do it.”
When David’s frequent trips to and from London started putting a strain on Ann, her husband decided to take a much more active role a little closer to home. He joined the parish council, All Saints Parochial Church Council, was also one of the founder members of the Friends of Croxley Common Moor and volunteered to show visitors around the Croxley Great Barn. He also led a talking Spanish Group for Watford U3A and was an active member of the Chess Valley Labour Party.
Xanthe said: “Dad wanted everybody in the community to be looked after. He was even looking for glow worms on the moor recently. He was such a big kind hearted person who always had the time of day for whoever he met. He was a true family man.” Ann said: “He really would talk to everybody and anybody. I remember when some new neighbours arrived, I said they won’t want to talk to you. He said he would talk to them anyway. He was also a radio and TV personality and everyone remembered that voice. One man who we were talking to at The Chelsea Flower Shower one year said he would remember his voice anywhere.”
Cllr Chris Mitchell said everyone at the parish council was struggling to come to terms with the news and added David would be greatly missed. He added: “David was a very kind-hearte gentleman and very passionate about Croxley Green. He had a view on everything. “David put so much time into the parish council as well as many other organisations. In fact, he never even thought about the fact he was putting so much time into these organisations. He just got on with it. “He was an exemplary person and a great addition to the Croxley Green area, and we as a council are very keen to honour that.” Xanthe said: “We are so grateful for all the kind messages. We have had a big bunch of flowers and some neighbours saying they’d like to put something towards one of dad’s many causes.”
CROXLEYnews founder Nik Allen said he had many memorable encounters with David. He revealed: “After we ran a feature on whether squirrels were friend or foe, he phoned me on Christmas Day to say he had eaten one for Christmas Dinner. He was a real character; always had a story to tell and he’ll be sadly missed.” David’s funeral took place on August 3 at All Saints Church, Croxley Green. He leaves Ann, son Timothy, daughter Xanthe and grandchildren Kenya, Miles and Beatrix. 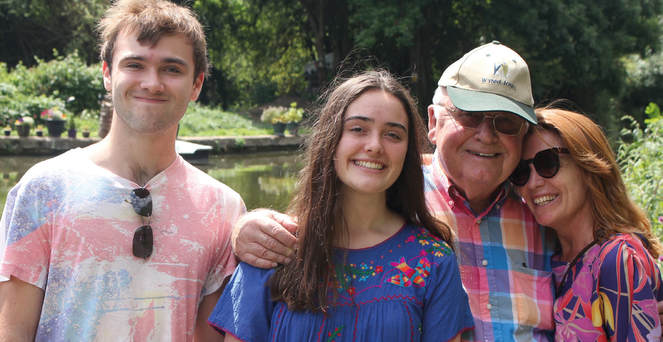 Should you wish to listen to the full unedited recording of the above interview, you can do so below