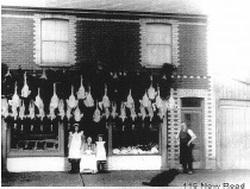 115 New Road, Croxley Green
New Road Shops - from a 2007 edition of the Parish Pump
I'm pleased to say that my previous article on shops in New Road prompted a good response from our older citizens, which allowed some of my observations to be verified. Before going into New Road proper, just have a quick look at the parade of shops in Watford Road opposite the Red House. Starting at Gonville Avenue end we had the following: Butchers (Mr Drew), Grocers (Hedges), Toyshop (Mr Snatchel), Hairdressers, Dr Bell's Surgery,  Post Office, Fried fish shop (Murrays), Chemist (Davis), Sweet shop (Goodmans) and a cycle shop. Crossing into New Road there were six cottages which were bombed in the war, flats now stand on this site. On the Red House side of the road there has been mention of a public house called The Rose, but this is questionable. Carrying on along New Road: 267 Sweet shop (Mrs Walley); 222 barbers (Sharman then Evans); Cheshire's of Ricky - cold meats etc; Gents tailors - Mr Batchelor. In 1915 No's. 167/173 a fried fish and chip shop became Mrs Tom's sweet shop. On the other side of the butchers at No. 175 Mr Mead put out a stall in front of the cottage to sell wet fish and there was a ladies hairdresser where the library now stands. No. 54 was a fried fish and chip shop, ladies hairdressers and then a dry cleaners. Many of these memories are from the thirties. Before the Barton Way estate was built,several people remember driving cattle down The Green for milking at dairies situated on Scots Hill and New Road and for slaughter at the rear of Jackson's butchers. I particularly wish to thank Mrs Richardson of Springfield for sharing her memories with me. Also the owner of No. 115 New Road for giving me an old photograph of the original shop as Poulterers, the hooks for hanging poultry etc still show in their lounge ceiling. So in No. 115 we have Poulterers, wet fish, greengrocers, antiques, bicycle sales and now a residential property. I am now researching the oldest part of Croxley Green - Scots Hill.
David Neighbour

The Pest House
The Pest House - from a 2005 edition of the Parish Pump
One of the most popular footpath walks in Croxley is the one that cuts through Green Lane across Copthorne down to the fields to the River Chess. However, if one carries on along the (unparished??) length of footpath to Chess Lane, there is a tale to tell. On one side of the footpath is Pest House Field and on the other is Pest House Meadow, a clear reference to the fact that a Pest or Plague house was close by. Indeed I remember the ruins of an old red brick building with a large triple Tudor chimney which was eventually pulled down in the fifties. As a young child I remember my mother telling me that this was where they sent people to die. I decided to investigate and recently walked the footpath but no sign of the building remains. Back in the 17th century a town or village would have had a pest house or isolation cottage to send people who had such diseases as the plague and Smallpox so as not to contaminate the community.

Money would be allocated either by the local council, church or benefactors for the upkeep of the building and its occupants. My research shows that this Pest House was probably in use during the 17th century and continued until the mid 19th century. The salient point of the building was the triple Tudor chimney shown clearly in the
980's publication "Croxley Green as it used to be" - picture on left. At that time it was not known for certain that this was a picture of the
Pest House, but I can now confirm that it was. In researching this project I contacted many people and authorities, gathering snippets of information here and there, but my most valuable contact turned out to be a local lady - Mrs Esther Dorrofield. I called on Esther and
explained my quest. She immediately knew of the building and explained in some detail the usage by her relatives of the building as a family home from the 1920's to the 1940's. Much to my surprise and delight, an oil painting of the Pest House hung on the wall in Esther's dining room - pictured below.

The view is from the Chess side with the current footpath running behind, once again the triple chimney can be identified. The particular interest to me of the original land use of this building is the isolating of families because of Smallpox or other contagious diseases, which did not change much over the years. Indeed, I was sent to Watford isolation hospital, all my clothes, bedding and toys were burnt. The date
1939 - The disease - Scarlet Fever. Not much had changed from 1650 till 1939!! Although I feel satisfied that I have fully identified the building and its use, I will dig a little further to see if I can put some chronological order to the buildings construction.
David Neighbour 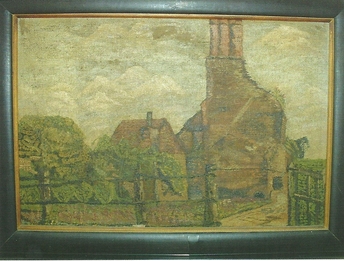