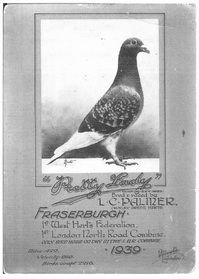 Pretty Lady 1939
A Croxley Bird! - originally published in the Parish Pump
Regrettably, I am no longer in a position to comment on the various organisations presently functioning in the Croxley area. My knowledge covers only the period 1939 -1952. The inter-war years saw a rapid growth of pigeon racing in the UK and Croxley Green produced some very notable fanciers and two in particular, L C Palmer and A Ashby. Len Palmer was the village shoe repairer and had his business in New Road, and Alf Ashby lived in a small cottage at the rear of what was then Dimmocks Store, also in New Road. I believe the cottage was part of the store. Their two names are enshrined in the hall of fame for long distance pigeon flying. The Club had its headquarters at the Railway Tavern in Rickmansworth, opposite the LMS station. Mine host at that time was J Windle, also a fancier. The secretary was Major Wallington, (I think he came from Chenies), Bill Bean and J Maisey came from Mill End and the Croxley contingent in addition to Ashby and Palmer were A Oliver, (Winchester Way) and Mr Gibson, (I think he lived near the Fox & Hounds in New Road). There were two other members but I cannot recall their names and of course my Father and I, Richmond Way.

Len's claim to fame came in 1939 when his bird (Pretty Lady) topped the then mighty London North Road combine, being the only bird home on the day of liberation, 2216 birds competing. This bird went on to repeat the same performance in 1941. A truly wonderful pigeon. In 1942 tragedy struck, she was missing from the loft. Len could not say for certain that she had returned from exercising, or whether she was in the loft when he let them out. Len always believed that the bird had been stolen as a footpath from Barton Way ran at the back of the loft and would have made easy access into his garden. Alf's claim to fame was to win the London North Road Combine Race from Thurso, a distance of 500 miles. I am not sure of the year, possibly 1939 or 1940. I am aware that pigeon racing does not hold a very exalted place in many people's estimation, but the sterling work that was carried out by these birds during the war carrying vital messages and saving aircrew lives when they had to ditch in the sea was in no small measure due to the expertise these men put into producing those birds with the quality to enable them to carry out the tasks demanded of them. The only other organisation that I can recall for that period was the Amateur Operatic Society that the Reverend Wilkinson so successfully founded which brought to the forefront many fine young singers, both male and female. Whether such a society exists today I cannot say
W. J. (Bill) Roberts