On November 15th 1895 a meeting was held in the dining room at the John Dickinson Mill where discussions concerning a club and reading room were considered. It was thought this proposal would enhance the social conditions of the workforce and also provide an opportunity for educational improvement.

The directors agreed that one of the company’s cottages should be converted for this use and 32 Milestone Field cottage was altered accordingly and named The Dickinson Institute. It was officially opened on 2nd December 1895. A key mover in the provision of this new social amenity was the recently appointed mill manager, Charles Barton-Smith who replaced Charles Hope Little and occupied numbers 1&2 Dickinson Square. Charles Barton- Smith, originally from Gravesend, Kent, working in the London offices prior to his appointment at Croxley Green. He lived for many years in a large detached house, Lindiswara, facing on to the Watford Road and close to The Square. Initially the club use was intended only for men, but this soon changed and membership became available to women who were given equal rights as committee members.

Some ten years earlier, in 1886, prominent personages in the village, including Mr. Woolrych of Croxley House, Rev Astley Roberts, vicar of All Saints Church, Mr. Warwick who lived at Highfield House, Scots Hill decided that a working men’s club should be provided and one of the Cherry cottages on Scots Hill was rented for this purpose.

However, with the increase of workers at the John Dickinson mill these facilities had became very popular and soon unable to accommodate large numbers. This was a prime reason that another club should be made available and adopted the address 32 Milestone Field cottages in 1905.

Differing opinions have been voiced as to its exact location. A change of address occurred for Milestone Field to Dickinson Square and many people have taken 32 Dickinson Square as its position. However, because it’s possible there was a superstition of numbering houses 13 or because number 5 cottage was used for some time as a shop and not actually numbered as such, consequently when renumbering took place with Dickinson Square 32 Milestone Field became 31 Dickinson Square. In addition many have suggested this is more likely as number 31 backed on to the newly planned Dickinson Institute in New Road and number 31 was the caretaker’s home for many years.

Members of the workforce provided and enjoyed many forms of entertainment including shows and concerts. Previously such shows had been accommodated in either the schoolrooms or in the dining rooms at the mill.  The club facilities were available to the mill workforce and the village as a whole and many took advantage of the various opportunities on offer. The hall was used for a variety of social and educational activities including shows, concerts, plays, dances, lectures and as a gymnasium for girls. The Church Lads Brigade practised drilling there. It became the Headquarters for the Cricket and Rifle club.

A local voluntary payment Benefit Society was established so that in times of immediate hardship monies could be claimed back for assistance. Technical and educational classes including dressmaking, wood carving, chemistry as well as opportunities for a drama club and choir, were provided.

In 1904 the facility was so popular that it was expanded by the addition of a new brick building facing on to New Road. This addition marked the centenary of John Dickinson & Co. It was officially opened in early November of that year in the presence of many senior  members of the Dickinson family together with Sir John and Lady Evans, Mr. F Pratt Barlow and local representatives including Mr. & Mrs. Woolrych, Rev C E Donnel and councillors from the Rickmansworth Urban District Council and the Institute Committee attended. Formally opened by Mr. Alfred Moseley CMG promoter of the Moseley Industrial Commissions, the new building encompassed many of the original activities and also a science room. There was a reading room for men and a clubroom for women and girls. Funding was assisted by the grant of £50 from the Hertfordshire County Council. During the year of the centenary all employees throughout the Company were invited to sign an illuminated book.

At the club, Miss Barton- Smith, daughter of Charles Barton-Smith was responsible for managing a new library. The debating society met there on a regular basis. Baths were installed for the benefit of those who lacked this desirable facility in their own home. To provide the adequate water pressure and also to pipe water to the nearby cottages, a large supply tank was erected adjacent to the building. Below this tank a useful room was added. This room which was known as ‘The Tank’ became the home of a rifle club and a troop of Rover Scouts. In 1910 a new games room was added and the meeting place for many sports clubs including cricket, hockey and badminton as the Mill owners had by then purchased six acres of ground for a recreation field opposite the Red House public house.

A large flagpole at the front entrance to the Institute was used to raise the Union Jack on important national occasions. It was also a means by which the population was informed as to which team had won the annual Oxford and Cambridge boat race, an event of great public interest in those days. Very few people had radio or even crystal sets, all of which were still in early development. 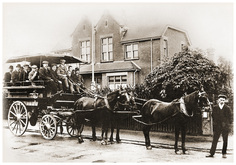 Outside the Institute setting off for a day out
Mill manager, Charles Barton-Smith had a telephone installed at his home ‘Lindiswara’, - giving him prompt communication with the Mill premises, and he would be the first to receive the race results. He then hoisted the relevant light or dark blue flag on a flagpole in his domestic garden. Once seen by the villagers other flagpoles including that at ‘The Tute’ would be similarly dressed. The school and The Red House public house flag poles were included in this most important news flash. There can be little doubt of the importance derived from some degree of betting as to the outcome of the race. In fact people often wore rosettes showing which team they supported.

The original ‘Institute’ cottage now became redundant. Caretakers/ stewards were necessary for the running and general care of the new buildings. The Wingfield and Parsons families were associated with this task for many years and so they lived at number 31 Dickinson Square.

The focal point of the village moved away from Scots Hill and became re established in this newly developed area. The Wilbee’s another well known family operated their brake (horse and cart transport) to and from Watford charging a 6d fare. The brakes were for hire and on occasions local men would hire a brake for a day out to Sarratt or Chipperfield in order to visit a different hostelry.
From May 1916 to 1919 the Institute was used as a Voluntary Aid Department (VAD) convalescent home for wounded soldiers sent home to recuperate during the First World War. Many changes and alterations were required to convert the Institute into a convalescent hospital and this began in 1915 but it was not completed on time. Blame was placed on the railway as the 30 beds due to arrive were delayed ‘en route.’ It was also necessary to make changes to the kitchens and provide sufficient sanitory equipment.

Recently a quantity of memorabilia, originally belonging to the Barton-Smith family was discovered at the Croxley Green Scout Hut, Watford Road.  Charles Barton - Smith was manager of the paper mill until he retired in 1918. He was probably responsible for commissioning this album of photographs taken to record The Institute and the John Dickinson Company's part in the WW1 events. His son Arthur Barton- Smith was prominent in developing the scout movement in Croxley Green as well as funding for the building. 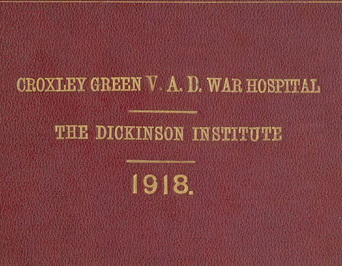 The front cover of the album 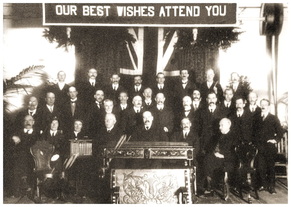 Charles Barton-Smith seated left of centre
Charles Barton –Smith retired from John Dickinson in 1918. His family had also played active and major roles as group leaders in setting up many organisations. Many activities that could not be held in the two local schools took place in the Institute. There were dancing classes at which young members practised their maypole dance routines prior to the annual Mayday procession to The Green. Incidentally this procession and celebrations was the forerunner to the Croxley Revels. Miss Wilbee conducted ballroom dancing lessons in the hall and introduced special weekend ‘6d hops’

Following the General Strike in 1926, when discussions between the company and its workforce resulted in an agreement to form an in-house union, called the Union of the House of Dickinson, the ‘Tute’ then became known as the Guildhouse.

The village expanded rapidly during the 1930’s when a vast house building program was undertaken and Croxley Green changed from being a rural community to become a semi- urban environment. 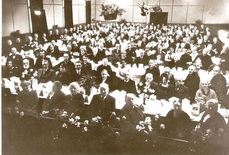 John Dickinson retired employees dinner 1930c Can you recognise any family members?
The Guildhouse was ideal for wedding receptions and family celebrations. It was also the scene of many celebratory dinners from ‘in-house catering’ during the 2nd World War the Guildhouse and adjacent hall were used as school rooms in order to provide education for the large number of evacuated children who arrived and quite overwhelmed the local schools. It was agreed that the available halls and the schools in Croxley Green should share all their facilities and so lessons were therefore rotated to give all pupils the same opportunity.

After the war, the population set about restoring normality and the Guildhouse/Hall reverted to its peacetime functions. John Dickinson’s individual departments continued to hold their annual balls there and these were, for the time and locality, very spectacular. Evening attire of ball gowns etc. were the normal dress. 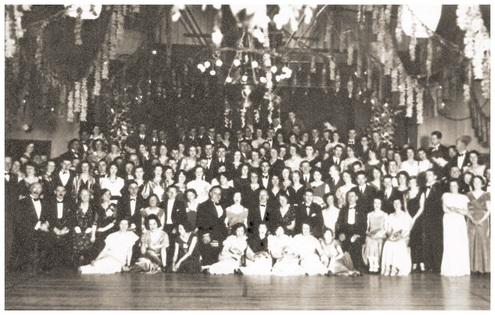 A grand ball
The Mummers troupe that had begun performing in the 1920’s continued this tradition even as older generations into the 1950’s were often on stage here. Croxley Green was a community ~ a unit ~ self-sufficient in entertainment as well as providing a wide ranging choice of shops and commodities.

There was no need to go elsewhere because almost everything was available within walking distance of any part of Croxley Green. Sadly, much of this was to come to an abrupt end in unforeseen circumstances. On the afternoon of Sunday 3rd October 1965 smoke was seen to be billowing out of the hall at the rear of the building. A horrendous fire took hold and destroyed everything in the building and much of its structure. 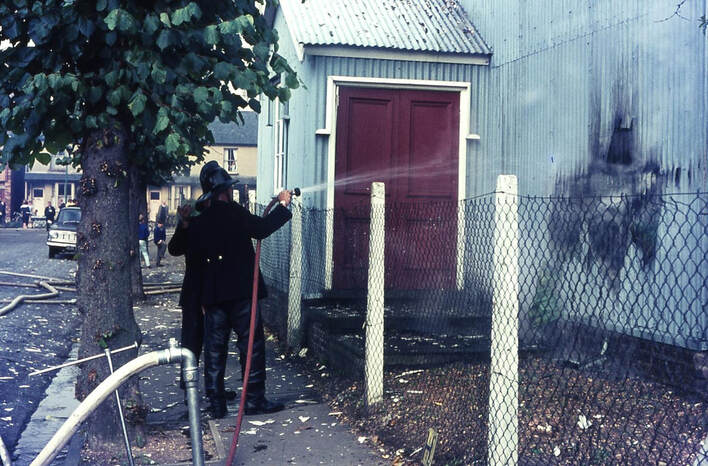 (© Michael Loose) A fireman is attempting to stop the fire spreading.
Rebuilding and replacement costs in the region of £55,000 were quoted, influenced to some extent by modern requirements in terms of material and statutory regulations and it appeared to be beyond John Dickinson’s budget. The company was experiencing major financial problems in their world-wide business.

Without the hall the many activities were to come to an abrupt halt. Eventually, the overheads proved unmanageable and after some five years or so the site was sold for redevelopment. The building existing on the site today is aptly named The Guildhouse Flats.

The following photographs show just some of the activities that were held both in the Institute /Guildhouse as well as the hall.